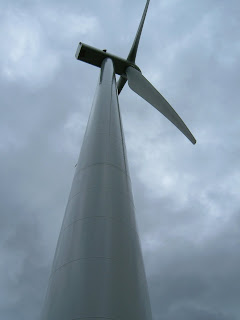 Recent announcments from the Coalition Government on Electricty Market Reform spell the start of another period of investor uncertainty in the renewables industry - just at a time when developers and manufacturers are 'tooling up' for the next wave of offshore development, and green energy - mainly wind - is proving not only its economic worth in an uncertain economic climate, but in terms of making a serious dent in our use of fossil fuel generated power.
Only last weekend, despite reports of 'the wind slowing down' from some broadsheets which should really know better, wind was putting almost a tenth of all power consumed onto the UK grid, giving our dominant gas generators a breather and slowing down the UK import meters connected to French nuke stations.
In the meantime our ageing nuclear fleet kept humming away in the knowledge that it is to be re-branded the new green fuel, and its future UK developers (mainly French, German and Spanish) are now lined up to be guaranteed some form of public support mechanism to allow new plant to be built alongside a potentially 'one-size-fits-all' deal for low carbon generators.
In doing so, renewables could be forced down the same 'market reform route', as apparently the current renewable price support system - the Renewables Obligation - isn't working. Well, whilst not perfect, it is working, and as more renewables capacity gets approved and built, it will get even better. Of course there is a consumer cost to the RO - just over a billion last year - but in the context of the £2.4bn spent over the same period to clean up decommissioned atomic plant this seems quite a bargain, not least as renewables are set to take nuclear's 3rd place in the power generation game after gas and coal within the decade.
The EMR is out for consultation at present, with proposals ranging from opening up the curently limited Feed in Tarriff to larger generators (good), to more complex market intervention arrangements such as 'capacity payments' and 'contracts for differences' which are most notable by their lack of detail (not so good!). But then what else are such consultations for, if not for industry to let Government know exactly what it wants!
Whichever mechanism evolves it needs to be fair, transparent, affordable and simple. But above all, it must be put in place in such a way to maintain market confidence if we are to continue to reduce our dependance on imported fossil fuels, decarbonise the economy and achieve the energy mix we are looking for.
Posted by Steve at 22:11